The Misty Smoky Mountains flows over peaks and valleys showing her beauty to the thousands of tourists Fred & Pat Maples have seen over the past 5 decades that they have been in the motel business. Customers have became friends like family & then their children & grandchildren still return even to stay with us at the Rivergate Mountain Lodge overlooking the rustling Little Pigeon River.

Fred & Pat who own the Rivergate Mountain Lodge took pride American owned & operated motel. They did their best to make everyone feel special & welcomed as part of their own family. Fred recently passed away and Pat has now retired, but don’t worry…We will still take care of you through Pigeon Forge Cabins and Resorts L.L.C. We are natives of The Great Smoky Mountains and have pride in our hometown of Pigeon Forge and will welcome you with open arms. We appreciate our guests and love to see them come time after time. Fred and Pat’s family is our family.

Fred was born in 1924 in Buckner Hollow on the side of one of the hills in Sevier County. Just like Dolly Parton, the doctor had to come on horseback, but being a little late Fred was already there. He moved from hollow to hollow during his early years usually not a mile from each other. Born 1 of 8 children in a little shack which was full of joy and love of the lord, his mom, dad and siblings sang in a gospel quartet for many years. Singing gospel music was a big past time and joy in the hills where just across Little Pigeon River was his neighbor Dolly Parton & her 11 siblings singing their own Glory Hallelujah. Up & down the river they crossed swinging foot bridges to go to church or just to visit & help each other. The year was 1943 Uncle Sam sent Fred a special letter. He was only 19 years old & just finished the 8th grade, since children only went to school a half a year at a time & the other half was spent working on the farm to survive. Fred boarded a bus in Sevierville TN, leaving his mountain home for the first time for the big unknown world he was not accustomed to for World War II. He has told his story with tear filled eyes so many times how the military service was hard in 1943. War was raging & fighting was done on foot for the larger part. He tells of being in the selection department and quoting “I would like anything but the medic unit.” Next morning he awoke from a long bus trip from Chattanooga TN to Rockford, His eyes beheld a field full of ambulances. He soon realized the military does not always honor your requests. Fred’s journey would take him across the oceans many times in the next 20 years. A young teen from the mountains of TN had taught him hard work & most of all respect for your fellowmen. His lips quiver as he tells war stories of how many time the military officers would request the hospitals to send them a number of corpsman for the field. The doctors would say each time, take any of the corpsman but don’t take Fred Maples. Fred says because of his hard work and respectfulness of his job, he stayed while others passed on the field. Fred also able to recall the story General George Patton after his car crash on December 9,1945. The car crash paralyzed General Patton from the neck down. Fred was working at the 97th General Hospital in Frankfurt, Germany when he received his orders to go care for the General. General George Patton lived until December 21, 1945. General Patton is buried at the Luxembourg American Military Cemetery, and is the highest ranking and most famous soldier buried overseas. Fred’s 20 years of military service ended in 1967 and he returned to his beloved Smoky Mountains.

Pat Maples grew up in Panther Creek Park about 40 miles from Fred. Pat was 1 of 6 children who also knew of hard times. The generations from Pat & Fred’s time will be the last ones to remember outdoor toilets, no electricity, no TVs, computers etc. that people now enjoy today. When a car passed by on the dirt roads children would watch the dust until it went out of sight which would only be maybe 1 car a day. In 1944 sugar, gas, shoes were rationed with stamps & mountaineers would trade stamps with neighbors such as gas stamps for sugar stamps to make their moonshine which was survivor-ship for large families in that day. Pat was also running a motel when her & Fred met. Together they spent many years volunteering on the foreign missions which is the passion of their life. Pat & Fred have been on many mission trips to many places like Guyana, Brazil, Venezuela, Mexico, Russia & most important her own back yard of the Smoky Mountains to spread the word & their love for the Lord. They have always dedicated their profit from the motel to mission work to spread the word of the Lord. Pat says “How could I ever repay my Lord enough for what he has done for me. He gave his life so that I could have eternal life with him.” Sometimes the repeat customers will check in & talk with them for hours just swapping stories. We will miss them greatly but hope to bring new stories and adventures to each of our guests!

Now, about the New Owners…Jim and Judy Searcy Jim was in the army in 1960-1962 stationed at Ft. Lewis Washington in the 105-155 artillery assigned to the 32nd. infantry division after completing his service. He then came home and worked building homes.

Jim and Judy married in July of 1963 and he built their home in the beautiful rolling hills of Kentucky: Where they then had two children, Bob and Robin.

They both worked hard as farmers until 2003 and then started landscaping design after retiring.

They sold their farm in Jan 2017 and this is how they come to buy The Rivergate Mountain Lodge. We love having you here with us. Hope we are able to earn your stay each time you come to the Smoky Mountains. Call us to book on the river. 18888897865 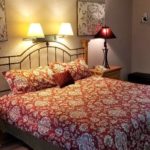